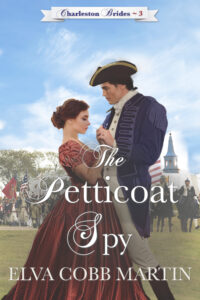 A Charles Town belle and a blockade runner ignite fireworks in more ways than
one during the American Revolution.

To Anna Grace Laurens, the war is like a distant bad dream until her family’s Charles Town plantation is burned and her parents murdered by those loyal to the king. She flees on horseback and leaps into the Cooper River to escape her pursuers.

As John Cooper Vargas sails his sloop down the river, he spots a woman diving into the water. After firing on the Tory raiders chasing her, he rescues her and offers to take her with his parents to an island hideaway for the duration of the war. But she has other plans, including revenge for her parents’ deaths. She insists he drop her off in Charles Town, even with the British planning a massive attack by land and sea to retake the city, the Pearl of the South.

John employs his sailing skills for the patriots, risking capture and death, but he enjoys his skirmishes with the British navy blockade to bring goods from the islands to aid the cause. But when Charles Town falls to the British, he docks his ship in a secret cove and joins Francis Marion’s militia. This decision lands him wounded on a harbor prison ship where more men die than on the battlefield.

Anna Grace braves the deprivations, first of a city barricaded against the British, and then one surrendered and ruled by fists of iron under the English flag and injustice. Can she find a way to rescue John before it’s too late?

As both American and English armies gather near Yorktown, Virginia, for a pivotal battle, can John and Anna’s love for each other and their faith in God preserve them and help forge a new nation?

I really enjoyed this story.  Anna Grace's disconnect from the war that becomes a horrible reality and it was just heartbreaking.  At the same time, it was heart pounding and you were cheering her and urging her to survive.

John rescues a damsel in distress, or maybe just someone needing a hand.  I liked the two of them together.  Their romance was good.  At the same time, the book isn't simply a romance there is so much more to it than that.  It's a war and there is a lot going on.  I really liked every aspect of this book. 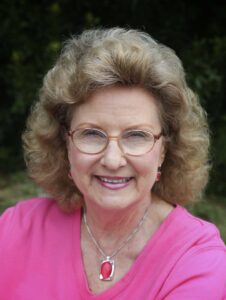 Elva Cobb Martin is a wife, mother, and grandmother who lives in South Carolina with her
husband and a mini-dachshund. A life-long student of history, her favorite city, Charleston, inspires her stories of romance and adventure. Her love of writing grew out of a desire to share exciting stories of courageous characters and communicate truths of the Christian faith to bring hope and encouragement. Connect with her on her web site at http://www.elvamartin.com.

I loved researching and writing this historical novel in a day when our nation’s true history is being threatened by political change agents. My faith in our godly heritage and the courage and faith of so many true Americans was confirmed as never before. Who can ever discount the wisdom, bravery, and escapades of Francis Marion, Andrew Pickens, and Thomas Sumter that helped save South Carolina after the British retook Charleston? Who can doubt the prayers and courage of George Washington and the Continental Army, and the many brave patriots who made the ultimate sacrifice, or who suffered privation and loss of property but who never gave up the dream of a free nation? We are the land of the free because of the brave.

In honor of the brave patriots, I placed quotes from leaders in this period at the head of each chapter. Here’s the quote I chose to introduce the book:

The hand of Providence has been so conspicuous in the course of the war that he must be worse than an infidel that lacks faith. –George Washington, August 20, 1778.

Many interesting tidbits I found in my research surprised me. Francis Marion was dubbed the Swamp Fox by his British pursuers who could never catch him. His battle tactics gave him the distinction of being the father of modern guerilla warfare and the inspiration for Mel Gibson’s character in The Patriot. Also, Marion did not drink alcoholic beverages. The drink he prescribed for himself and required of anyone who joined his militia was the old Roman drink of water mixed with a little vinegar. Today we know this as a fortifying concoction, and it probably prevented scurvy and was a natural antibiotic for the militia.

Another surprising tidbit I learned was about George Washington. Barely into his second term as president (1793) the popular French Ambassador Genet stirred up a furor with a lot of the colonists. He wanted to force Washington to join France in their renewed war against England. Having just won our independence, the president refused to lead our fledgling nation back into war. Ten thousand people gathered in the streets of Philadelphia, the nation’s then capital, day after day, and threatened to drag Washington out of his house, raucously demanding that America take up France’s struggle for liberty as France had done for America. The peace and unity of the new nation seemed to be hanging by a thread.

Just when it seemed like the new nation would fall over the precipice into anarchy, America was ultimately saved, according to the later retired Vice President Adams, by an outbreak of Yellow Fever in the capital city. “The coolest and firmest minds,” he told Jefferson, “have given their opinions to me, that nothing but Yellow Fever…could have saved the United States from a total Revolution of government.”

I discovered this incident of heated colonial protest during the recent rioting and destruction of property that rocked our American cities in the summer and fall of 2020. It actually gave me hope for our nation. It seems there have always been hotheads in every generation who rise up against the rule of law and order. However, America and our wonderful Constitution have been preserved, and we give God the praise, and pray for His continued help.

The Petticoat Spy is, above all, Anna Grace Laurens and John Cooper Vargas’ love story. It’s also the story of the patriot dream and victory over an undefeated British military while also dealing with serious supply shortages and conspiring neighbors who hated the dreamers.

It is my prayer that both threads will inspire hope and encouragement to all my readers.

For Him and My Family, October 12

The Meanderings of a Bookworm, October 16

She Lives To Read, October 18

To celebrate her tour, Elva is giving away the grand prize of a $50 Amazon gift card!!

Posted by Ashley Wintters at 10:47 AM